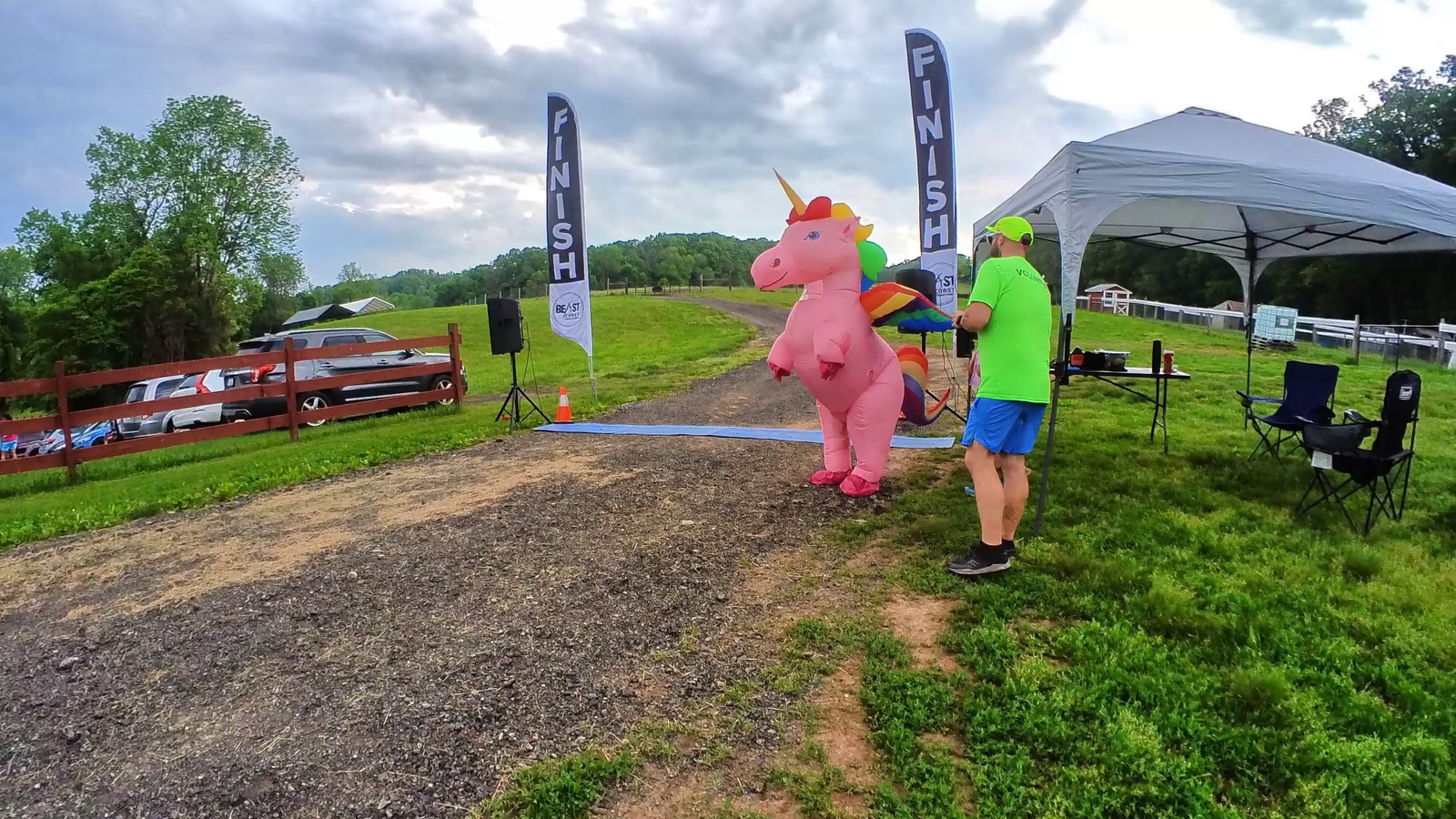 I made the fatal mistake of running someone else’s race. I was running too much with a 25K person vs a 50K pace in the heat. I was just having too much fun and not really thinking. I should have known better, I have had races in the heat before and knew this could happen. Basically, I didn’t save anything for the 2nd loop, where the true race began. I had put too much stress on the body early and created a debt I was unable to repay. I should have slowed down, but my ego got the best of me. I was under the false assumption it was going to stay cooler because there was good cloud coverage. On the 2nd loop, as expected, the heat/humidity shot up and I started to slow down drastically.

The first loop was good, I was running with TJ and it was nice to talk with him. The only issue was he wasn’t doing the 50K, he was doing the 25K. He was in 6th place for the 25K when he crossed the line and I was right behind him. Why in gods name did I think that was a good idea is beyond me… I wore compression sleeves and filled them with ice, I had an ice bag on my chest, and I took salt tablets. Once I started getting dizzy I knew I was in serious trouble, it was at this point that I tried to find shade and lay down. There was a nice person who ran a bag of ice back to me, I should find out who that was and thank him. He didn’t have to do that and sacrificed a huge amount of time from his race because of my stupidity. All I could do at that point was wait it out until I could get back on my feet. I tried to get up but my leg kept cramping. As I started to walk back near the stone wall I threw up all the water in my stomach. Once that happened I actually started to feel much better. I have to use the aid stations more effectively if it’s this hot. Stop, don’t rush, take your time and relax. It would have maybe saved my race and given my body time to absorb the water. I should have known I also missed the sign that I wasn’t peeing. That can be an indication your body is not processing the water.

What would I have done differently

Tips for my next hot race:

I went to this race with zero planning and it showed. The only item missing from my heat strategy was SLOWING DOWN. Thinking I could beat the heat was such a stupid idea that backfired. I am glad it did. I am two weeks away from my first 100 of the season and I would rather learn the lesson here than there. That’s the power of the weather and I never respected it. If you disrespect the heat, the rain, the cold, it will END you.

The longer the race the more you have to create a plan and stick to it. You can’t just POWER through longer races. The mistakes of the beginning catch up with you. If there is heat in the forecast, then you need to go out PAINFULLY SLOW. Meaning so slow you almost can’t stand it. Put yourself at the back of the pack and just wait.

On the plus side, I did get some good footage to remember this failure. Enjoy! 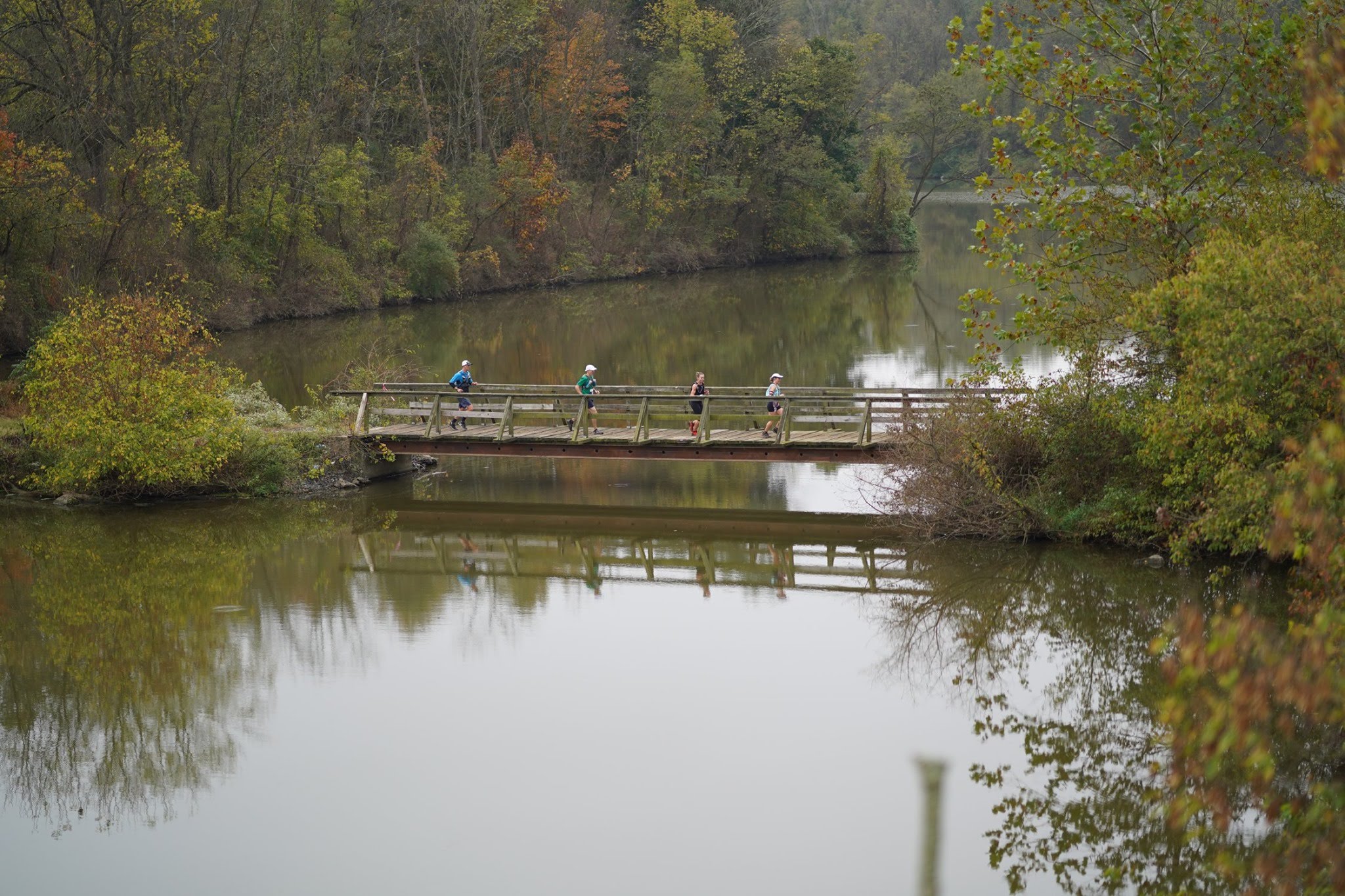 Published by Patrick Durante on October 10, 2019

If you are going to run your first ultra, the Blues Cruise 50K is the one to pick. That’s just what I did years ago and I keep coming back. The vibe of this race is incredible!
This was my 7th time racing Blues Cruise and I had what I call “fun with race day friends”. That’s when you meet new people on the trail and have a great time with them!

I meet an incredible group of very fast women, all of which won awards in their respective age groups. Making friends can lead to a better race, but its the type of thing that only happens in ultras. It’s the shared suffering that creates a sense of comradery with strangers. You get to take your mind off the pain and it makes the running feel effortless! It places a limit on your suffering and for myself, I seem to run faster! My times are varied for this race, but maybe its because I don’t meet the right people? I’m unsure, but I finished right at 5 hours and felt great. I gave the race everything I had and that’s all one can hope for, just doing your best.

I set the virtual pace on my watch at 9:20 and was going to stick to that pace. This was based on what I had done in years previous. While in the race I had more fun running with strangers than focusing on time. I dropped the time goal and just made it about having fun. The people you are running with are better company than the clock. Know when to abandon something that no longer serves you, especially your watch!

I felt a lack of strength in the last 3 miles, the race taking its toll. I still lack late-race leg turnover, which means I lack strength.  Next year I plan to incorporate more strength and signed up for CrossFit classes at CrossFit Kanna. If I had structured workouts with a group I think I’ll find the missing link to better performance.

10 minutes after the race, I’m in pain but sad. It went by so quick! I don’t want my season to be over! When you are having fun time flies. That night I couldn’t even sleep. I was excited about how well the race went and how much fun I had. I hate to think about the day when I can no longer do this. I just love these long races. Races are the easy part of the season. You are filled with such excitement and being in the race is pure joy. I hope I can keep running until I’m 90! If I can’t I will just find something new to excite me that matches my physical ability.  Keep moving, keep training and keep racing! I always say there will come a day when I can no longer do this. Today was not that day, but hopefully, that day never shows up…

Published by Patrick Durante on August 21, 2019

This seems like a total, “1st world problem”, but what happens if you start to feel depressed after a huge race?

We need massive goals in life that seem impossible to overcome. What happens after you achieve them? With great highs come terrible lows, the yin-yang of completing an ultra race. Finishing one of the hardest, HOT, races in my life I am faced with the question… What’s next? You completed that big task, conquered a difficult day, but life goes on. There’s no parade in your honor. Every day presents new challenges. You need to move on, life is more than your big wins. Set up new, dare I say it, bigger challenges! Rest and take pride in what you achieved, enjoy your victory, but don’t sit in the shade too long. The longer you sit, the harder it is to get back up again. When you start to feel the depression of “now what do I do”, and you wish to experience it all again you must KEEP MOVING! You have to set your sights on the next goal. Start planning the next big race, put something on the calendar. There’s always another race or event to plan for. If you won, or lost on that big day its no guarantee for future success. Nothing is guaranteed. Keep putting in the time and showing up!

One day of success or failure doesn’t define you. It doesn’t label you an ultra-runner. What if you didn’t make it through the course, or beat that time goal you had? In 100 years who cares? I’m sure you would be upset. Just remember life keeps moving, it doesn’t stop for you or your feelings. What life DOES do is give you more opportunities. The saying goes, that when everything goes right we learn nothing. It’s when things go WRONG that we learn the most. Maybe I would have learned more had I failed at my big race than making it to the finish line?