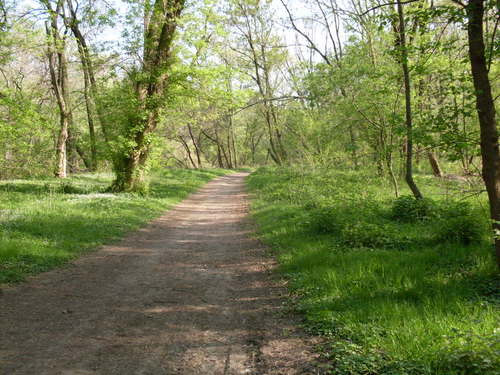 Published by Patrick Durante on October 15, 2010

My new love affair has been trail running, the only issue is that I can’t seem to find enough races to participate in that take place on trails.  Enter the sloppy cuckoo trail run, when I first found out about the race, I was excited, because I was familiar with the trails from mountain biking there.  I knew the terrain couldn’t be too technical and it was very similar to where I do most of my trail running.  They pride themselves with the largest starting line in PA, which I would have to agree with.

The race director was late getting to the start, because he was out on the course setting up the additional aid stations.  After he returned, the race started promptly and was off to a frantic start.  It didn’t take much time for people to get into a line, because you quickly had to form a single line to cross over the bridge and head to the opposite side of the creek.  The aid stations had both water and Gatorade.  The course was well marked, which I was concerned about it being my first trail run.  Most of the time I spent running the trail alone, only occasionally getting passed (17 people total).  If I had to run this race again, I would have prepared better with longer distance trail running. Since at the time I was only doing a mix of half trails with hills/half flat trail.  The race director had stated that the course was mostly flat, but that wasn’t what my Garmin had shown.

The food at the finish line was exceptional.  They had: cookies, soda, sausage sandwiches, beer, chips, pretzels, and all the types of bad food you want after running a 13 mile race.  If you missed out on this race, they are having another half marathon trail race on October 31, which is the “October Lauf Fest”.  I hope it is the same course as the last.  There was only one stream crossing that you had to deal with, which you could almost jump over.  I didn’t make it to the other side, and one of my shoes did get wet.  Had there been more rain, the course would have had a few more of these little streams to cross.  I ended up finishing 5th in my age group, so I just missed an age group award.  Hopefully I’ll do better in the Oktoberfest race.  I did receive a nice wooden race whistle that is very useful for annoying my dog.

This race was so much fun that I will be sure to enter it every year.  If you live in the Philadelphia area, it’s definitely worth the trip.  Odds are you will be near that mileage anyway if you had done the Rock and Roll 1/2 Marathon in Philly.